Jesus I Trust in You

My five years of university can be summed up with the famous quote, “Success is going from failure to failure without a loss of enthusiasm.” Attending a university with little to no Catholic presence meant I was constantly challenged in my faith. I struggled with health issues, depression and learning disabilities. I was constantly failing something. I was tired. Every time I made progress I was knocked to the ground. It seemed as though the Lord didn’t want for me what I wanted for me.

My call to missionary life came loud and clear in Rio De’Janeiro, where 3,700,000 Catholics gathered for World Youth Day in July, 2013. It was there that I abandoned my life to the Lord. I told Him I was tired of fighting for what I wanted and I was ready to give my life completely to Him. I immediately felt a sense of relief and joy; I was laughing and crying at the same time. 5,000 pounds of weight had been lifted from my shoulders. I wanted nothing more than to jump and run around; which of course wasn’t possible with every inch of the Copacabana Beach covered in people.

The next day a Jesuit Priest handed me a prayer card with a quote from Pope Francis:

“We cannot feed God’s flock unless we let ourselves be carried by God’s will even where we would rather not go, unless we are prepared to bear witness to Christ with the gift of ourselves, unreservedly, not in a calculating way, sometimes even at the cost of our lives…”

Immediately after reading these words I knew the Lord was calling me to be a missionary.

But what did that look like? What did that mean? What about the degree I slaved for? Was it all for nothing? What about-“Stop!” spoke a voice in my head, “be still”. “Jesus I trust in you” became my mantra. Every time I questioned, every time I doubted- I stopped, and remembered.

Upon my return from World Youth Day I found a spiritual director. Fr. Craig became my rock and journeyed with me through my discernment. The first week of the school year, CCO East Coast Regional Director, Eric Myatt came to help promote our re-formed Catholic group on campus. Eric taught me about CCO in 40 minutes and we set up a (very successful) survey table at the clubs fair. Later that week I received an e-mail from Eric inviting me to apply for staff. The following Sunday a guest priest came to our University Chapel to speak about a one year Catholic mission to Guyana. After mass he invited me to apply. 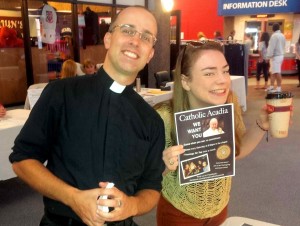 I hoped I would only get accepted to one, but God didn’t make my decision that easy. By the middle of March I had been accepted to both.  I felt like a color blind version of Neo from the Matrix: red or blue? RED OR BLUE?  But which was which!? In the movie the blue pill offers the “ignorance of illusion” while the red leads to the “truth of reality”. Both of my options would allow me to grow, live and proclaim the gospel daily. But only one was red. Only one would be the true reality God was calling me to. “Jesus I trust in you.”

I met with Fr. Craig 4 days before I had to give my answer. We decided that God’s call was clear: I would go to Guyana for the year, I was so excited! Fr.  Craig suggested that we live with the decision for 4 days and re-evaluate on Monday morning. I lived my life as though there was nothing more to consider. Every time someone asked me about my plans for next year, I told them about my mission to Guyana. I had found the red pill… or so I thought. “Jesus I trust in you.”

I met Fr. Craig Monday morning and simultaneously we both expressed an unsettled feeling that we had picked the wrong pill. Through conversation we discovered CCO was the correct choice, not Guyana. We sighed and laughed in relief. We were both worried we would have to convince the other of God’s true call. “Jesus I trust in you”.

After the decision was made, everything seemed easy. Before I knew it, I was finished school and driving a very full car across Canada by myself to start this incredible journey. I never felt alone, knocked down, or tired. How could you fail after taking the pill God picked for you?  It was effortless. I knew the Lord had called me by name and that he would be with me every step of the way.